The venue for our September meeting was The King’s Head. Ama was in the chair and our topic was “Friends and Other Strangers”, which produced a wonderful variety of mostly true stories of people we have known – playground bullies, friends both faithful and treacherous, imaginary friends, colleagues, neighbours and strangers observed. My title is taken from Rosalie Challis’s poem “Role-call” which explored the relationship between a portrait-painter and his model.

Wendy Nicholson, our local Beatrix Potter, has produced a new book. It’s beautifully written and illustrated and absurdly cheap at £2, which goes to  Northern Red Squirrels. It would make a lovely present for a child of any age.

This year’s Bradford-on-Avon Poetry Competition has resulted in a set of ten beer-mats featuring the short-listed short poems on the subject of Light. What a great idea! They can be found in pubs in and around Bradford-on-Avon, and the set can be purchased for £5 from the organiser, Dawn Gorman, dawngorman37(at)virginmedia(dot)com. 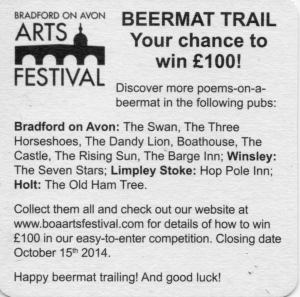 There is an evening of poetry, including memories of Laurie Lee, on Saturday September 20th at The Red Brick Building in Glastonbury. For details see the RBB website.

On Wednesday October 1st at 7.30pm in the Bath Royal Literary and Scientific Institute in Queen Square, local poets Rosie Jackson and Jeremy Young will be launching their début pamphlets; do go along and support them if you can!

Our next meeting will be at The White Hart Hotel in Sadler Street on Monday 13th October. The room is on the ground floor at the back. It will be in use by another group until 7.30, so if you arrive early please wait in the bar. For those coming from Glastonbury and Street there is parking nearby in the Market Place. If you’re coming from Bristol/Bath/Frome a more convenient parking place is St Andrew Street, alongside Cathedral Green. Walk through the archway onto Sadler Street and the White Hart is directly opposite.

Rachael will be in the chair and has chosen “Nearly” as an optional theme. Off-topic poems are welcome too, of course.

“Find out the reason that commands you to write; see whether it has spread its roots into the very depth of your heart; confess to yourself you would have to die if you were forbidden to write.”
― Rainer Maria Rilke